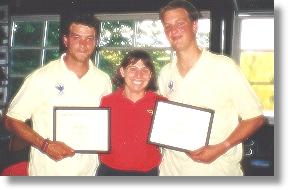 Due to the generosity of members of the 101st Toronto Troop, one of the first groups to camp at HSR, two bursaries were awarded in 2000.  A $300 donation, in memory of Marjorie Day, wife of Scouter Dick Day, allowed the Alumni to award a total of $800.

The $300 Marjorie Day Memorial Bursary was awarded to Ryan Bell (aka Tumor). 2000 was Ryan’s fifth year working at HSR.  He served as an IT, Store/archery, waterfront, composite skip, and staff assistant.  Ryan has also been a cub leader with the 1st Caledonia pack for the past four years. Ryan will be attending McMaster University in September studying History.

Gordon McLean was awarded the $500 HSR Staff Alumni Bursary.  2000 was also Gord’s fifth year on staff.  Gord worked as archery/survival, survival/outtripper, staff assistant, fall assistant ranger, senior  maintenance, spring assistant ranger, and composite skip.  In 1999, Gord attended college during the summer, but volunteered at camp as much as he could.  Gord has been awarded the Purple Bead twice.  Over the years, Gord has also been a cub leader, scout leader, and an active rover sitting on round tables. Gord just completed the Drilling and Blasting program and is beginning Geology at Sir Sandford Fleming College in September.

This entry was posted in Bursary and tagged bursary. Bookmark the permalink.