A History of HSR

A Brief History of the Haliburton Scout Reserve

At the close of World War II, the Toronto Scout District (eventually to become the Greater Toronto Region) asked their Camping Committee to find a suitable location within reasonable driving distance from Toronto, for a rugged area of land available for a scout camp for older scouting members.

After months of searching, they discovered that the Mill Valley Lumber Company was completing timber cutting on 4,150 acres in Dudley Township in Haliburton County. Following a $25 down payment, the council approved the purchase of 4,150 acres at $3.75 an acre, and thus the original HSR, then named Camp Kennabi, came into being in the fall of 1946. Most of the original buildings were those used by the lumber company and many are still in use, such as Kennaway, Mill Valley and Cooky Cabins and Kennabi Lodge. Additional acres were purchased in the following years to complete the Reserve as we know it today.

The first troops camped in 1947 on the north shore of Kennabi Lake, with one canoe and two army trucks (bought from War Assets for $325 each) being the transportation available. These were the 81st Toronto from Rosedale United Church, the 22nd Toronto from St. Paul’s Anglican Church (Bloor Street) and the 101st Toronto from Windermere United Church Swansea. The first sites in use were Twister Point and Big Bear.

Field Commissioner James C. Moore, known to all as “J.C.”, was the first Camp Chief, with a staff of 5 Scouts. JC was the person instrumental in finding the property which was to become HSR and served as the Camp Ranger for 25 years until his death in 1972. Moore Lake and the JC Trail were named in his memory. Today the staff number more than forty young men and women who continue to be led by experienced senior staff.

A building campaign was undertaken in 1949 with the original camp hospital (now Bayview Lodge), Pow-Wow Lodge and the Kitchen at the Rotary Hub being built. Since then, several staff buildings and many new program facilities, etc. have been added. A new hospital was built in 1985 and a new Country Store and Administration Office built in 1991 and dedicated to the memory of another long time Camp Ranger, Jack Dobson. The original camp headquarters, Kennabi Lodge was restored in 1994 by the HSR Staff Alumni and dedicated to the memory of a 23 year veteran staff member, Frank Standing. 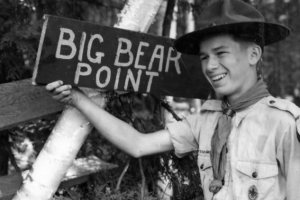 In 1952 a composite troop from the Toronto North Area was the prototype of this style of camping, which grew to become, in 1953, Camp Kennaway. Both camps continued to prosper and grow until 1960 when, due to duplicate administration and mounting costs, the two camps merged into one – the Haliburton Scout Reserve.

Since that time, the Reserve has become what is the largest Scout Camp in Canada and the summer home to countless thousands of Scouts and Scouters from all over Canada, the United States, Britain and many other countries.

6 responses to “A History of HSR”