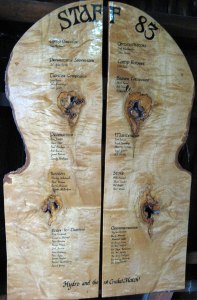 When it came to woodworking, the late Peter Curtis (81–83) was an artist. He asked me to help him bring in the wood for the plaque that year and told me what he had in mind. We agreed that one of the ancient standing dead maples on the west side of Holland’s Lake would be ideal. Frank Standing (66-67,69-72,74-88) with chain saw and Willy’s Jeep made up the third member of our team and away we went. Frank and that Jeep could go about anywhere so we were soon parked beside the perfect specimen; about 40 feet high and as big around as a bear trap.

Peter was only about half way through when it started to groan, we stepped back and down it came with a tremendous roar. Peter then went where the top had come down and began to cut the piece he wanted for the plaque. Suddenly he stopped and just stood there. “Good Lord,” said Frank, “look at that.” Peter turned to me and said, “Have you ever seen a tree bleed?” I walked up and saw thick red liquid pouring out of the cut Peter had just made.

Of course, the tree was hollow. Rain water and sap and rotted wood had all mixed and created the ‘blood’. It must have been five minutes before we could continue and the ground looked like a slaughter house. We finally got a chunk into the Jeep and returned to camp. Then we took the wood to a sawmill where it was cut into workable slices.

After that Peter wouldn’t let me see his creation. He liked to keep his masterpieces a secret until the final banquet. I’m sure by this point of the story everyone knows which plaque I’m writing about. I know that when I first saw what Peter had done with the crude chunk of maple we brought out of the bush I couldn’t believe it. He had that wood glowing with the same glory and beauty that the tree had when it was young and strong.

Sadly, I’m the only one who can tell the story of where that wood came from. Frank passed away some years ago after a full life of giving and teaching, and Peter was tragically killed in a car accident when he was just a young man. The plaques he made are a testament of his character and talents. I’m sure that someday I’ll be able to sit by the fire in the Hub and chat with Peter and Frank about that plaque and the day the tree bled.